In ﬁrst experiments of their kind, Islington Council is working in partnership with Treework Environmental Practice and City Suburban Tree Surgeons to research the fungal disease called Massaria which affects plane trees.

The ﬁrst of three trials commenced in the middle of June, 2012, at Highbury Fields. The trials will investigate whether the impact of Massaria can be reduced by assisting plane trees to become as healthy as possible and to develop resources to swing the balance against the fungus. While there is no guarantee that this will work – it is clear that no fungicides have been developed to do the job – so, with a little help, can the trees themselves ﬁght back?

An innovative pruning technique is being developed to stimulate growth and cellular and hormonal activity in parts of the trees within their crowns rather than just at the leafy end of otherwise long, bare branches. Three trees in an avenue have been pruned and over the next two years they will be observed to see how they develop by contrast with un-pruned trees of similar type in the same avenue.

The pruning aims to have two benefits: ﬁrst, if activity can be stimulated along the whole length of the branches, this increase in vigour may of itself help to contain Massaria; secondly, by pruning away small-scale branches at the outer edge of the crown, the reduction in weight and consequent lessening of branch bending – especially on the horizontal branches – may reduce the incidence of micro cracks on the upper surface of the skin of the branches, so preventing easy access to the cambium by the fungus.

The pruning involves the removal of just the branch tips, wood no larger in diameter than 2 cm. Look hard at the picture at the head of this article and you can see the tiny, circular cut across a branch below the tip of the saw. It is skilled work, particularly the climbing to such heights and along such spindly branches – the top photo of the climber at work is a detail from the picture below. 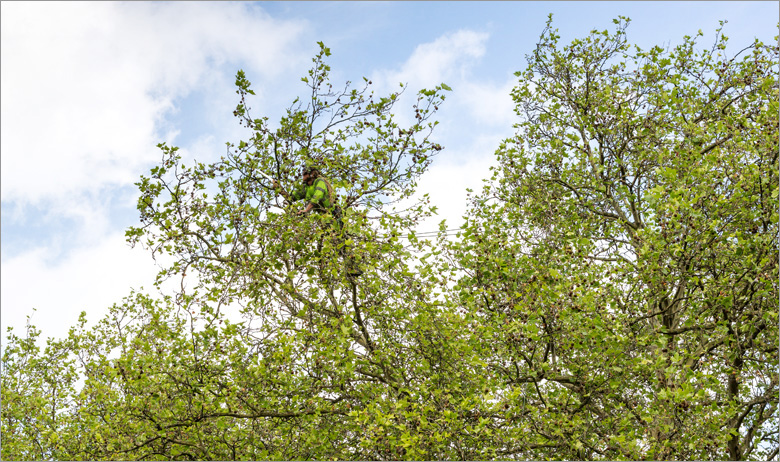 Pruning the finest branches at the top of the tree 20 metres above the ground. Fortunately, the wood of quite slender branches of plane trees is surprisingly springy and strong. 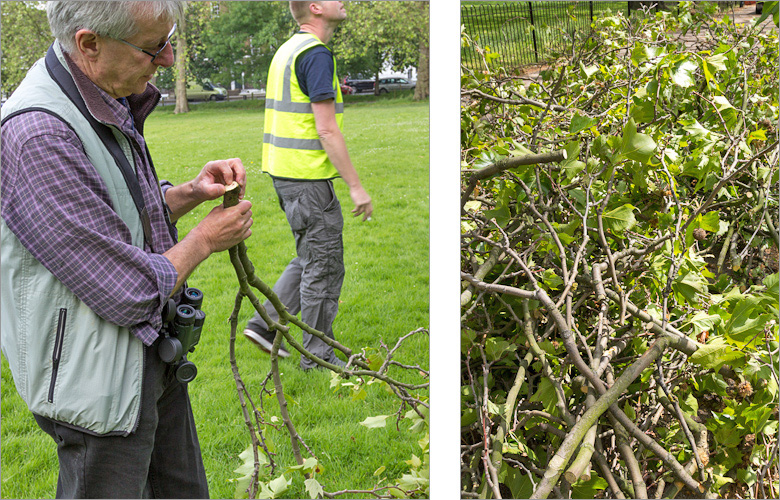 Neville Fay of Treework Environmental Practice inspects the first pruning for size and signs of Massaria. Piles of small-scale prunings soon amounted to a significant reduction in leaf cover and weight at the end of large branches. The object is to remove small pieces of branch from all over the outer edges of the crown of the tree to stimulate new growth and a healthier tree. 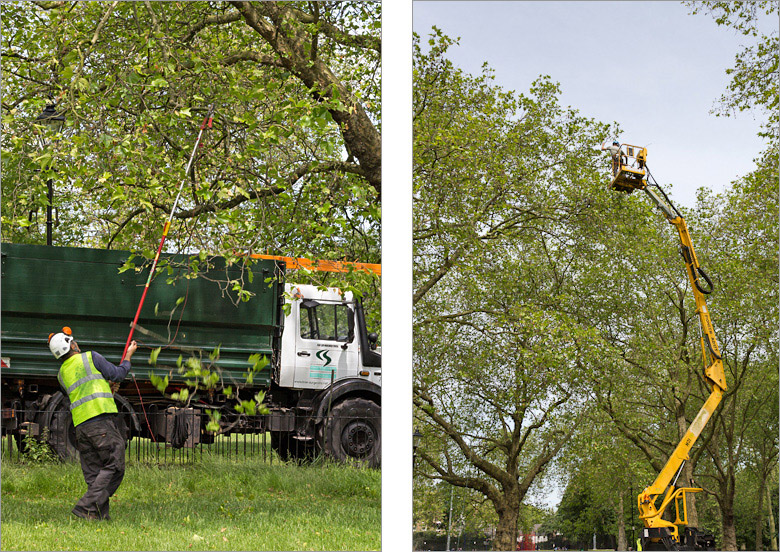 The tools for the job: many branches were cut at ground level or from a hydraulic platform. 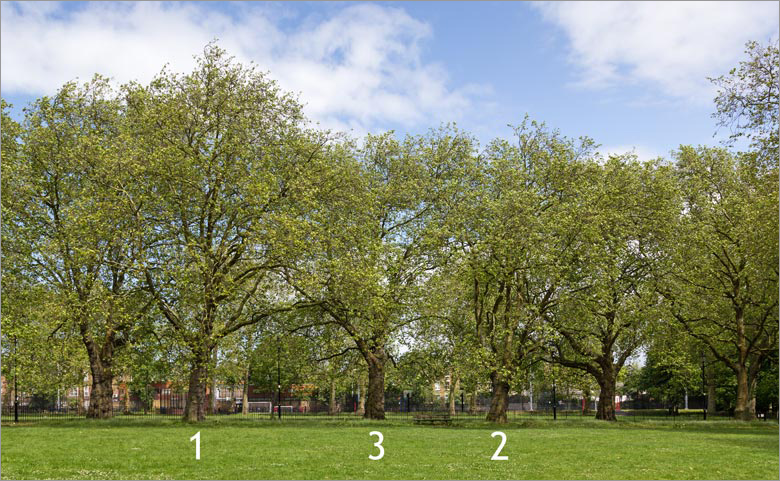 The three, pruned trees numbered in order of pruning. Unless you knew otherwise, it would hardly be possible to tell that any new tree work had taken place.

This trial began in mid-August. Three trees growing beside Queen’s Walk were selected for feeding and the application of beneficial fungi and bacteria, partly by spraying the leaves, partly by drenching the ground immediately above the trees’ root systems. The foliar spraying was achieved by Treework Environmental Practice’s invention of a new type of spray-head at the end of a specially constructed, carbon fibre pole that was manipulated from the ground by up to three people so that the spray could  be directed to cover the whole crown of the tree while pole and trees swayed in the wind.

The enormously long, telescopic pole incorporates a small diameter tube from the pump sitting on a trailer forcing the fluid to the topmost branches of the trees. The fluid itself was a custom preparation by Laverstoke Park Laboratory based on composted material that was gently mixed with water to produce a ‘compost tea’, and aerated until the time of application so that the organisms it contained did not die before being released onto the trees.

The aim of this treatment is to make the trees healthier and so better able to resist the massaria disease that has been causing serious damage in recent years. While the fungi and bacteria being applied are directly beneficial to the trees, hopefully, by coming into competition with the massaria fungi for their own survival, this may also help redress the balance in which the massaria currently seems to have the upper hand. In this approach to tree care, the tree is seen as a complete ecosystem, above and below ground, that can be supported in its interaction with its environment, rather than having a discrete problem for medication. It is expected that the trees will be re-sprayed over the next year or so, about once a month during the growing season. 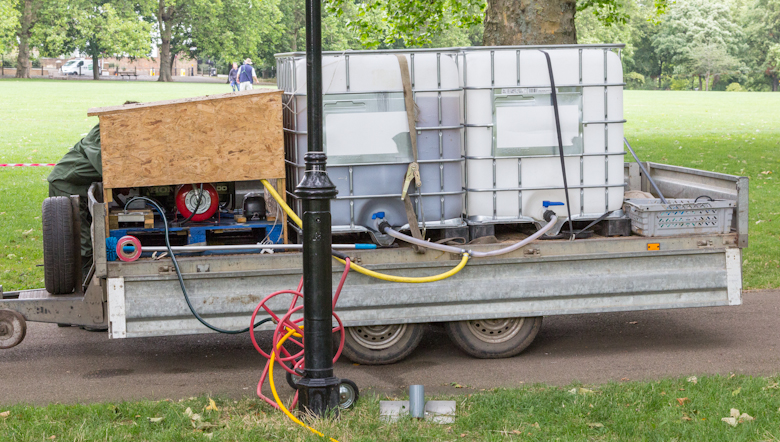 The trailer carrying two large tanks of prepared foliar feed and soil drench which the on-board pump forces through the pipework to the top branches of the trees.

The fully extended telescopic pole containing the pipe that sprays the liquid fertiliser, now working and readied for hoisting into the crown of the tree. 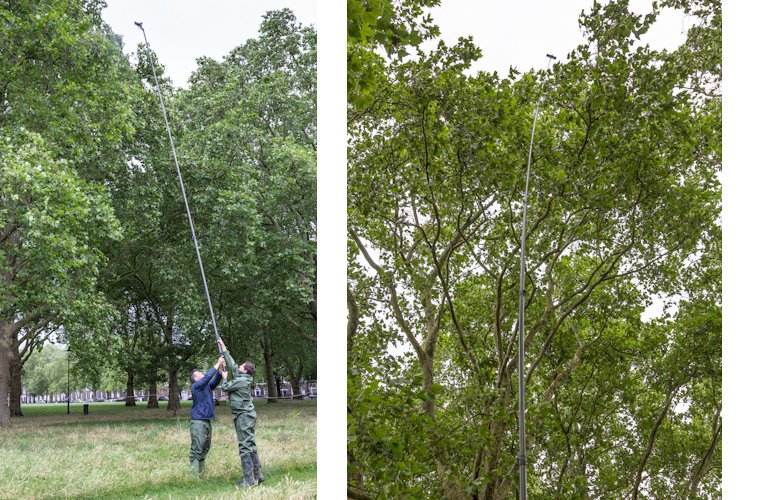 The branches and the telescopic pole sway in the wind as the spay head is manoeuvered through the canopies of the trees. 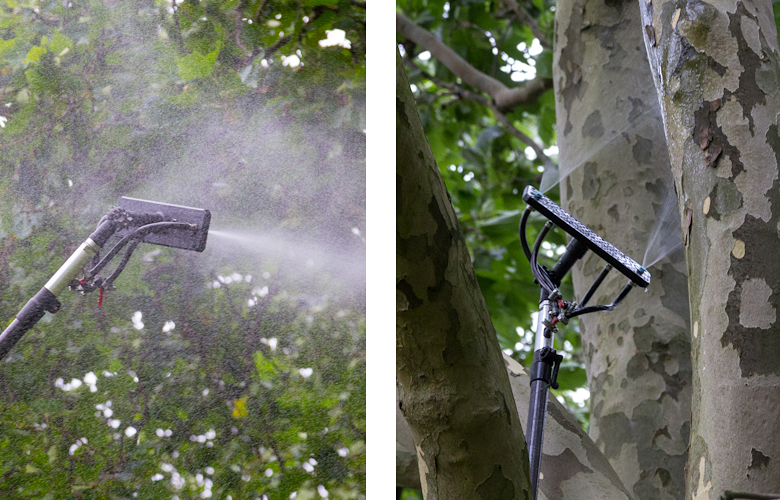 The spray-head is used to deposit the mixture on both leaves and branches high within the canopies of the trees. It is necessary to use quite a low pressure spray to avoid damaging the natural organisms contained in the fluid being applied. This is not a poison spray, but an example of the use of nature’s own potential for maintaining tree health. 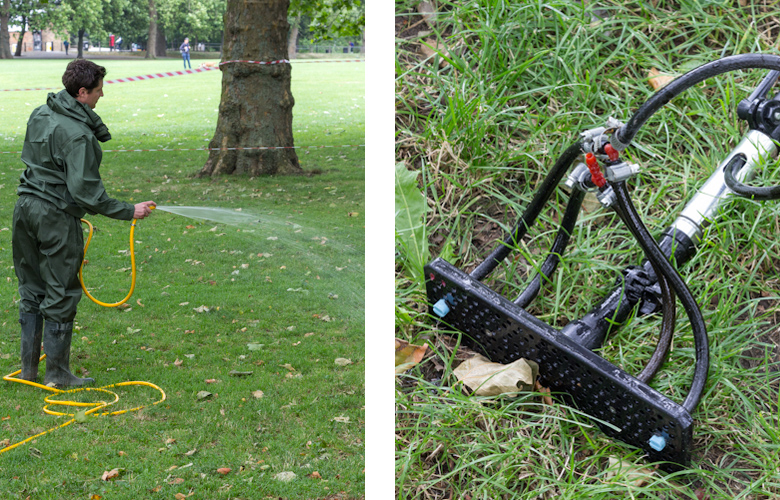 After spraying the foliage of the trees, the ground is drenched with the same feed in the area above the trees’ roots. The soil itself is of poor quality with little nutrient value and the hope is that the introduction of microscopic organisms will re-start a chain of natural development that will slowly improve growing conditions, especially stimulating root activity to feed the trees. On the right, a close-up of the head devised for spraying the canopies in these challenging conditions.

Three more London planes, this time in the Orchard area of Highbury Fields, were identified for the third test aimed at improving tree health against Massaria disease. A leaf, bark and wood chip mulch, to a depth of ten centimetres, (four inches), is designed to cover an area that extends from the stem of the trees for a distance of ten to twelve metres, (11-13 yards). This takes the area covered with mulch from a yard away from the trunk – to prevent potential infection of its bark – out to the drip line, the point at which rain drips onto the ground from the leaves at the edge of the crown. The mulch is prepared from the pruned branches of similar species of tree to a specification drawn up by Treework Environmental Practice. 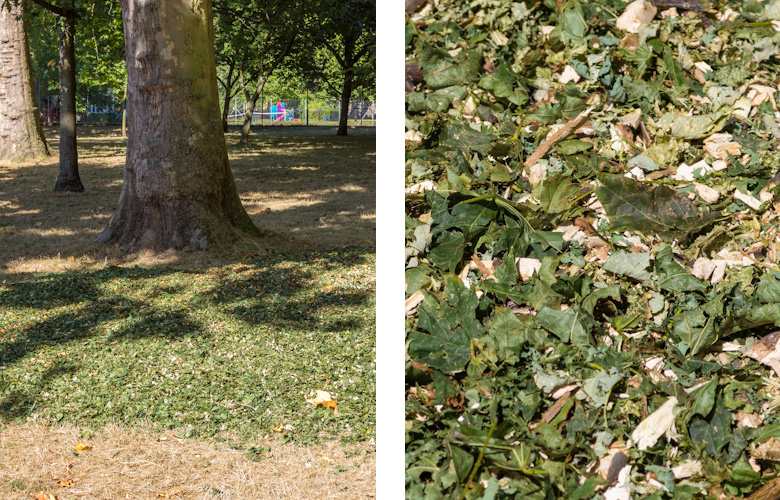 The first batch of mulch spread around one of the plane trees.The mulch is composed of the chopped prunings from other plane trees or similar species. It imitates, to a degree, the build-up on a forest floor where leaves and twigs fall naturally, returning nutrients to the soil and helping to conserve moisture in the soil.

The purpose of mulching is to improve soil conditions: a gas exchange takes place as the bark breaks down, causing nitrogen in the soil to be taken up – urban soils generally have an excess of nitrogen, but too deep a mulch of uncomposted wood chips can deplete the necessary levels of nitrogen and cause yellowing of leaves; the compacted soil is lightened and aerated as micro-organisms discover and work on the mulch, and worm activity is increased, pulling the decomposing mulch down into the soil. The soil can be tested after a period of time to assess the potential beneficial effects upon root activity and on the mycorrhizal fungi that have a 'friendly', symbiotic relationship with the root systems.

This trial has not been without its difficulties; getting the mulch laid down thinly enough has been an exasperating problem – it’s been well over twice as deep as it should much of the time. This is a substantial danger to the trees whose roots need oxygen to function. A mat of mulch too thickly laid on the ground can deny oxygen to the roots, use up too much nitrogen and, if left, can lead to the death of trees in severe cases. Tree officers are aware of this problem, however, and are determined to train their contractors accordingly.